(CNN Business) Kia has been trying for years to be seen as more than just a maker of inexpensive cars for buyers on a budget. Success has come gradually, but has now been capped off in the form a three-row crossover SUV named after Colorado ski town. Kia’s award-winning Telluride is selling so fast that its West Point, Georgia, factory can’t make them fast enough.

Ben Burton, general manager at Parkside Kia in Knoxville, Tennessee, said he already has a buyer lined up for each Telluride he expects to get from now through September.
“As soon as I get a VIN number, people are like ‘OK, that’s the one I want,’ he said. “They haven’t seen the car, they haven’t touched the car, they haven’t smelled the car and they’re contracted on the car and they’re ready to go.”
Demand for the SUV was helped, Burton said, by a heart-tugging Super Bowl ad last January featuring a young boy talking about his community of West Point, Georgia. “We hope to be known for what we do,” he says. “What we build.” 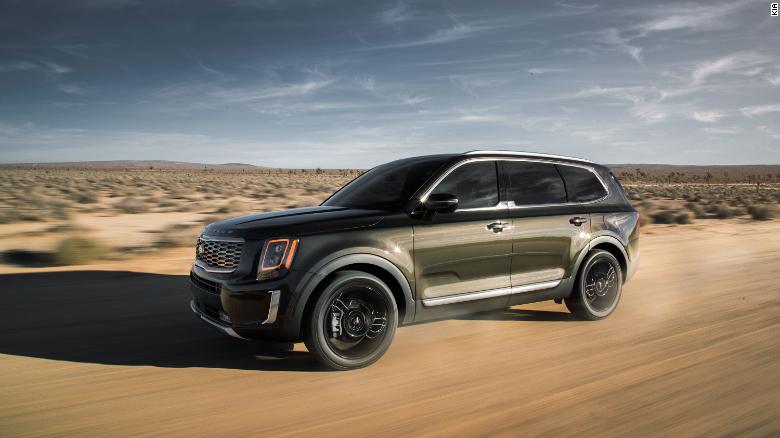 The Kia Telluride has won a series of awards.
Also helping has been a string of awards for the Telluride. Among the most prominent were the MotorTrend SUV of the Year award last November and the North American SUV of the Year Award in January.
The Telluride excelled in virtually every way, said Mark Rechtin, editor-in-chief at MotorTrend, from design to ride and handling and interior functionality.
“It was almost a unanimous decision to make it SUV of the Year,” he said. “They nailed it.”

The big, roomy Telluride was very much an American project. It was designed at Kia’s Irvine, California, design studio with the goal of creating a spacious SUV that would appeal to Americans, said Kia spokesman James Bell. Much of the development testing was done at Kia’s test track in Mojave, California.
Beyond its own attributes, the Telluride happens to fall into a market segment that’s doing relatively well at the moment. Auto sales are down due to the coronavirus, but midsize SUVs are among the sort of vehicles that have been doing best, according to data from Kelley Blue Book. (Pickups and small crossovers are doing even better.)
Telluride production started in February, 2019, but the factory shut down for the month of April, 2020, due to concerns about coronavirus and because of parts supply disruptions caused by the pandemic. The factory began ramping up production again starting in early May, and is now running three shifts nearly around the clock producing Tellurides, smaller Sorento SUVs and Kia’s new K5 sedan.

As a result, some dealers are charging more than the sticker price for Tellurides, something that rarely happens in the auto industry. Usually customers negotiate discounts from dealers. In this case, dealers are telling customers: If they want a Telluride, they need to pay more.
On average, Kia Tellurides sell for 3% over the manufacturer’s suggested retail price, according to data from TrueCar, an auto pricing website. Toyota Highlanders are selling for 7% below MSRP and Ford Explorers 8% below. Even the similarly-sized Hyundai Palisade, which shares much of its engineering with the Telluride, sells for slightly below the manufacturer’s suggested retail price, or MSRP.
The differences between the Palisade and Telluride are so slight that customers’ preference for the Kia mostly comes down to styling, said Rick Case. He owns a chain of car dealerships including several Hyundai dealers and two Kia dealers.
Case insists his dealers never charge above sticker as a matter of policy. “It’s too short-lived and too long remembered,” he said of the profit taking practice.
Making things even more profitable for Kia and its dealers, the Tellurides customers want most aren’t the base model but more luxurious trim levels with more options and higher starting prices.
Sticker price for the base model Telluride LX starts at about $32,000. Prices for the SX, the top trim level, start at $10,000 more. That includes features like 20-inch wheels, two sunroofs, a high-end 10-speaker stereo, more chrome on the outside and more leather inside.
“The ones that we were testing were in the $46,000 to $48,000 price band and we were looking at each other and saying, ‘This is nicer than a Mercedes,'” said MotorTrend’s Rechtin.

Not too many years ago, Kia’s brand image could be summed up in a single word: cheap.
That’s been changing over the years as the Kias have begun looking more stylish.
Kia’s global head of design, Peter Schreyer, previously worked at Audi. Kias also usually provide a sharper driving feel than than competitors, such as Toyota and Nissan. Cars like the Kia Stinger compete credibly against German sports sedans, at least in terms of performance and available features, if not refinement.
The brand is also earning a reputation for quality. Kia finished at the very top among mass market auto brands in J.D. Power & Assoc. Initial Quality survey for each of the past six years.
That’s a big change from Kia’s early days in the US market, said Burton, who has worked with the company for nearly 20 years.
“We used to take bets to see how soon somebody would return in a Sportage or a Spectra with a ‘Check Engine’ light on,” he said.
Those days are long gone, he said, and now people are waiting their turn to buy SUVs costing as much as $50,000.
“The vehicles, went from truly a throwaway car where you’d buy it, you run the wheels off of it then you toss it,” he said. “Now people are buying these things because it’s, in some cases, a luxury automobile.”
Check out KIA Victoria’s inventory of Telluride’s here, and our whole SUV line-up here.
Previous Post
Next Post
Kia VictoriaCar ComparisonsKia Telluride demand Outpaces Factory