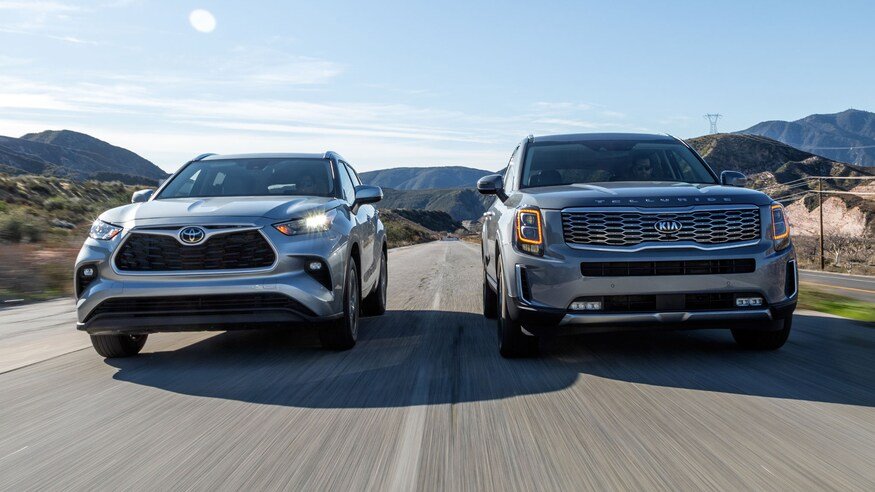 "It might have taken Kia some time to figure out just what Americans want in a three-row, but, by golly, it's finally nailed it."

It happened. The comparison we've been waiting for. Since its debut, the Kia Telluride has been crushing competitors and sweeping awards and recognition.

"Kia's new marketing slogan—"Tough Never Quits"—might smell like something dreamed up in a Madison Avenue boardroom, but there's some truth to that when it comes to the brand. "

As for the Kia Telluride, Cortina put it best. "It seems like Kia took a look at the whole segment, noted what worked and didn't work, and created the Telluride." The Telluride is both better to drive and better to ride in. It's roomier, better-built, and all-in-all a better family SUV. Few others in this segment take a more holistic approach to the three-row SUV than Kia. It might have taken Kia some time to figure out just what Americans want in a three-row, but, by golly, it's finally nailed it. 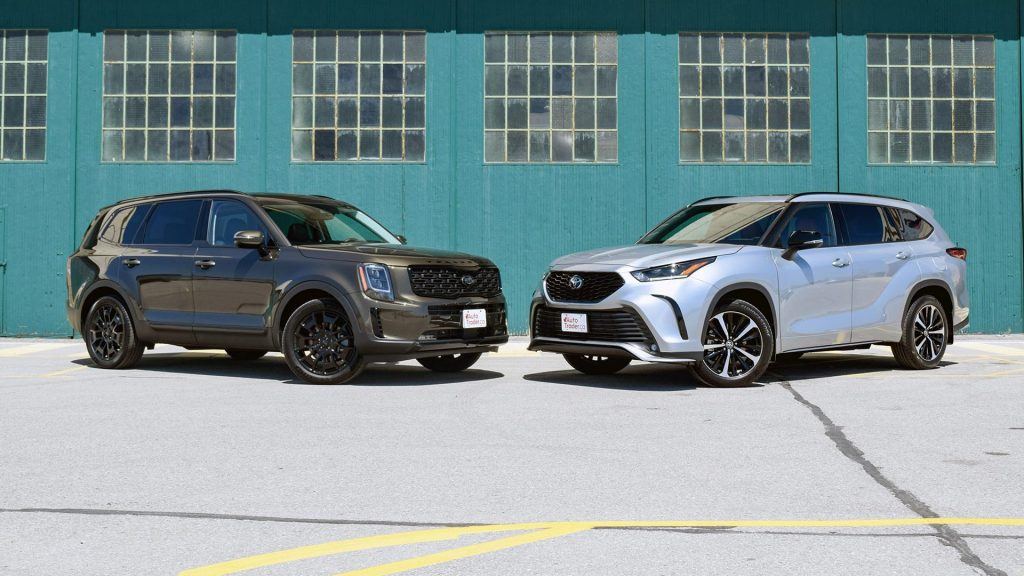 Kia's new marketing slogan—"Tough Never Quits"—might smell like something dreamed up in a Madison Avenue boardroom, but there's some truth to that when it comes to the brand. For the past decade, Kia has tried to build a three-row SUV that appeals to the average American. Its first attempt, the Kia Borrego, was too big and inefficient. Its next attempt, the second-generation Kia Sorento, was a touch too small. With its third effort, the 2020 Kia Telluride, the South Korean automaker has hit it out of the park by earning our 2020 SUV of the Year award.

A bit about Kia

While Kia has been been struggling to figure out what it is Americans want in a three-row SUV, Toyota has been building it since 2004, when the Highlander gained an optional third row. Since then, the Highlander has gained a standard third-row seat, a hybrid powertrain option, and it's gone on to become one of the best-selling vehicles in the segment. It even led the segment in sales last year, which is quite impressive considering it was the lame duck third-generation model.

With the new fourth-generation 2020 Highlander finally on the road, we were curious to see if it could hold off the upstart Telluride, or if there was a realignment at play in the three-row family SUV segment. We're hoping that weeks spent poking around inside and driving the Highlander and Telluride back to back could help us determine which is the better family SUV.

In the tale of the tape, both the Highlander and Telluride are pretty well matched. Both are V-6 powered, equipped with all-wheel drive, and just about the same size.

The new Highlander, styled like a 12/10ths RAV4, rides on Toyota's highly regarded modular TNGA platform, which underpins everything from the aforementioned RAV4 to the Prius. Under its hood sits a 3.5-liter V-6 making 295 hp and 263 lb-ft of torque paired with an eight-speed automatic. The mill powers either the front wheels, or, like in our Highlander XLE tester, all four wheels. (A 240-hp Highlander Hybrid is also available.) Inside, the Highlander offers room for up to eight when equipped (like our tester) with the second-row bench seat, or seven with captain's chairs. Pricing starts at $34,600 for a Highlander L and tops out at $46,850 for a Highlander Platinum. Our well-equipped but midgrade Highlander XLE stickers for $42,320.

Whereas Toyota styled the Highlander in the same vein as its best-selling RAV4, Kia made the Telluride look like nothing else in its lineup. The Telluride is a high-water mark in the segment in design and has an unmistakable presence, sitting on its 20-inch wheels with the confidence of a Ram HD and the swagger of a Cadillac Escalade. Built on a beefed-up version of the Sorento's platform, the Telluride sports Hyundai and Kia's corporate 3.8-liter V-6 under its hood. It produces 291 hp and 262 lb-ft of torque and is paired with an eight-speed automatic. Like the Highlander, front-wheel drive is standard, but our tester came with optional all-wheel drive. Both seven- and eight-seat layouts are available. Although Kia undercuts the Highlander on pricing trim for trim (prices start at $31,890 for a Telluride S and top out at $41,790 for a Telluride SX), our fully optioned seven-seat Telluride SX tester stickered for $46,910.

SUVs in this segment are always about compromise—usually in terms of styling, efficiency, or driving dynamics—but the one nonnegotiable across the board is the interior. To be useful to the most members of the family as possible, this mobile living room needs to be comfortable and spacious, easy to use, built to withstand years of abuse, and tech-friendly.

The Highlander makes a great first impression. The up-sized RAV4 design works well, with clear, easy-to-read screens and a convenient shelf integrated into the dashboard that offers plenty of room for wallets, keys, and charging phones. "The interior feels nicely upgraded from the old version; worth the money you're paying, especially at $42,000," editor-in-chief Mark Rechtin said.

As thoughtful as that shelf is, though, our extended time in the Highlander revealed some pretty glaring misses. For starters, there's the driver's (and passenger) seats. Although they're comfortable and supportive, they're both mounted so far inboard that the driver's left (and passenger's right) elbow will never be able to rest on the door-mounted armrest. Instead, both driver and passenger will have to lean on the under-padded center console armrest. Just as well, I suppose, because your hand will then be closer to the radio tuning knob, which, as associate online editor Nick Yekikian put it, is "in another county."

These, uh, quirks, could be forgiven if the back-seat package were exceptional, but the Highlander doesn't deliver there, either. Despite an increase in cargo volume behind the third row compared with the previous-generation Highlander (16.0 cubic feet versus 21.0 for the Kia), the new model has one of the smallest back-seat packages in the segment, which may be a deal-breaker if you find yourself needing to regularly use the third row. Although access to the third row is pretty easy—the second-row bench slides and tilts easily—space is nearly nonexistent. Unlike many vehicles in this segment, there's no way an average-sized adult—let alone any child over the age of 9—could sit comfortably for any meaningful length of time in the Highlander's third row. The second-row bench is far more human-friendly, with an amount of head- and legroom that ought to keep those over 6 feet tall happy. Second-row amenities are limited to two cupholders mounted in the fold-down armrest, HVAC controls and vents, and two USB ports down by your feet.

Overall, the Highlander's cabin is a mixed bag, but entering the Telluride is like getting upgraded from economy to business class. "This interior stands out from the get-go," MotorTrend en Español managing editor Miguel Cortina said. "The design and attention to detail, from the stitching on the seats to the wood on the dashboard, makes this interior look sharp."

Even ignoring the material quality difference between the disparate Telluride and Highlander trims, the Telluride comes out on top. Its fundamental design is exceptional. Up front there's a massive, easy-to-use infotainment screen, meaty grab handles, and plenty of storage cubbies. Not to mention comfortable bucket seats. The Telluride's second and third rows are also far superior to the Highlander's. The second-row captain's chairs have more leg- and shoulder room than the Toyota (though a touch less headroom due to our tester's panoramic sunroof), plus plenty of amenities, including four cupholders, HVAC vents and controls, AC and 12-volt outlets, and clever front-seat-back-mounted USB ports for charging.

The Telluride's third-row space, though far from segment-leading, is nonetheless superior to the Highlander, too. Accessed either by tripping up the aisle over a large step (bad) or pressing a seat-back button that instantly topples the captain's chair and slides it forward (good), the third row is pre-teen-friendly, with acceptable amounts of foot-, leg-, and knee room, though the headroom would be a bit pinched for taller occupants. Kia optimistically includes three seat belts in the third-row bench, but seating three across in this row rises to the level of cruel and unusual punishment in 49 of 50 states.

Which Has Better Performance?

For many buyers in this segment, acceleration, braking, and handling likely fall toward the bottom of the priority list, but I'd argue that how a three-row family SUV drives is just as important as how roomy it is. Not only does a more engaging drive keep the driver alert, entertained, and off their phone while slogging to work, practice, or school, but a vehicle with superior dynamic capabilities allows you to confidently get your loved ones where they need to go safely.

To that end, the Highlander is a miss. Its biggest issues are its engine and transmission. Continuing a long, frustrating tradition for Toyota, the Highlander's V-6 makes the majority of its 295 hp almost at redline—a space on the tach that few customers would ever dare explore—while its eight-speed automatic's tall gearing and tendency to get into eighth gear as quickly as possible further frustrates acceleration.

The Highlander doesn't steer or handle any better than it accelerates. Steering feel is numb and vague, leading to lots of frequent corrections as you navigate winding roads. Toyota's pillow-soft suspension tuning isolates passengers from most of the rough stuff going on underneath, but it's prone to roll hard in corners and float over bumps, prompting some comparisons to Toyota's Sienna minivan.

The Telluride, though not faultless, is the far superior drive of the two. The most impressive part about it is how well balanced it feels. Its suspension is firm without being punishing; it handles smartly, with good feedback and feel; and there's none of the tail-wagging-the-dog sensation that so many of the front-drive-based vehicles in this segment exhibit. Despite being nowhere near a sporty SUV, the Kia nevertheless manages to be confidence-inspiring on a good road.

The Telluride's weak spot, if we're nitpicking, is under its hood. Like the Highlander, it doesn't make much power off the line, though it thankfully comes on much earlier than it does in the Toyota. Kia's eight-speed automatic helps make the most of the V-6's powerband by shifting quickly and smartly, maximizing the amount of time the engine spends in its sweet spot.

Final Thoughts: Should You Get A Highlander Or Telluride?

The only ground the Telluride leaves for the Highlander is in official EPA fuel economy estimates. The Highlander is rated at 20/27/23 mpg city/highway/combined, whereas the Telluride nets 19/24/21 mpg. But as the saying goes, "Your mileage may vary." On our 135-mile evaluation loop, the Kia returned 19.7 mpg; the Toyota scored 18.1 mpg. You can credit the difference to the Kia's superior engine and transmission tuning.

The New Kid on the Block

Often in a comparison test we're left weighing pros and cons, comparing test numbers, and arguing over notes, but that just isn't the case this time. The Toyota Highlander might have been the best-selling three-row SUV in the U.S. last year, but the new one simply doesn't move the needle far enough forward to compete with the new kid on the block. It's neither particularly well packaged nor pleasant to drive. It is, however, well priced for the features you get, and its optional hybrid powertrain—one of only two in the segment—could be appealing to more forward-looking buyers.

As for the Kia Telluride, Cortina put it best. "It seems like Kia took a look at the whole segment, noted what worked and didn't work, and created the Telluride." The Telluride is both better to drive and better to ride in. It's roomier, better-built, and all-in-all a better family SUV. Few others in this segment take a more holistic approach to the three-row SUV than Kia. It might have taken Kia some time to figure out just what Americans want in a three-row, but, by golly, it's finally nailed it.

Looking for more? Build your own Kia Telluride here. Ask a question here. Or book a test drive here. 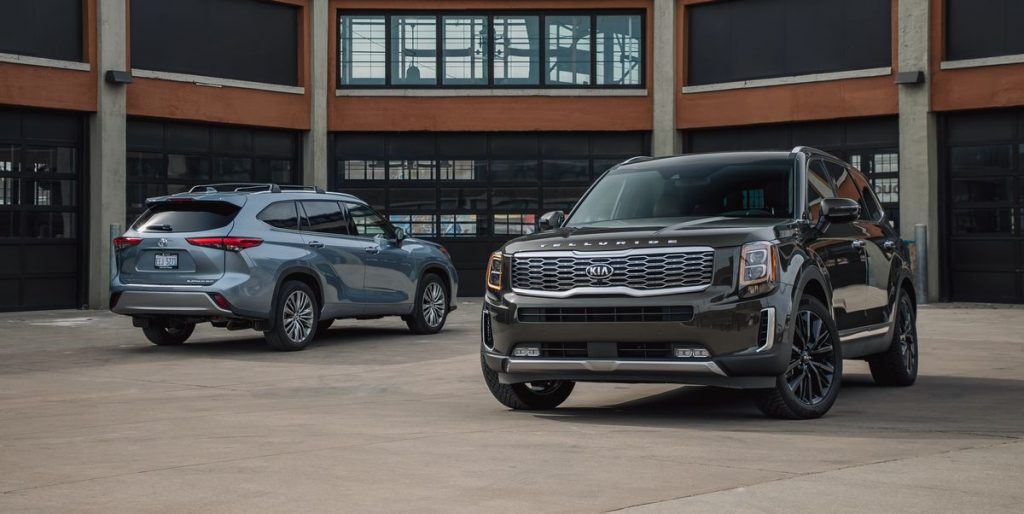 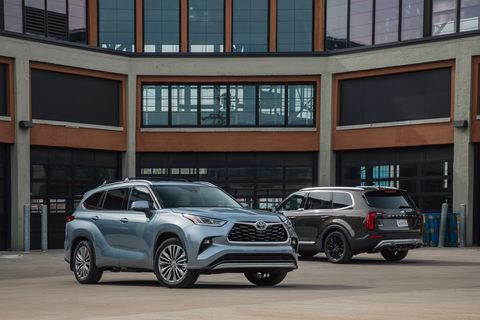